Cartmel Village Society is a voice for our village. It began life in 1993 as a means of conserving and celebrating the heritage of the village. With the aid of a generous legacy, it was relaunched in 2008 with the resources not only to conserve and celebrate our wonderful village but also to help to ensure that the village is a vibrant place in which to live, work and visit.

The village of Cartmel is unique and precious. Dynamic schools, innovative businesses, the finest church building in the South Lakes, and an historic setting in thrilling countryside. The Village Society exists to celebrate all these great things whilst ensuring that change is both sustainable and enhancing. The quality of life here matters for residents and visitors alike.

CARTMEL AND DISTRICT FLOWER CLUB enjoyed a very successful visit to Bridgewater Gardens, in spite of the heat of the day, and look forward to returning to see further developments within the gardens.
The club’s next meeting will be on Monday, August 15th at 2pm in Cartmel Village Hall. The guest demonstrator will be Carol Grieves from Brampton with “Summer Delights”. The club always welcomes members and visitors to all meetings so bring a friend for an afternoon of floral displays and refreshments.
For more information contact Isobel Briggs on 015395 33136. ... See MoreSee Less

CONCERT IN CARTMEL PRIORY
7.30pm Saturday, 13th August
The concert will be held in the Priory on Saturday evening by the Old London Singers. They gave a terrific performance when they last sang in the Priory (as the New London Singers) before the pandemic in 2017.
The Old London Singers were formed in 2008 to explore the superb music of the sixteenth and seventeenth centuries written for small groups of singers by British composers. These pieces often have just one or two voices on each line, and are frequently unaccompanied; they range from madrigals (the pop songs of their day) to some of the most beautiful sacred music ever composed. This concert includes some of the finest pieces from this period, set in a context of more recent pieces from the British choral tradition.
Many of the group are members of the New London Singers, one of London’s most exciting chamber choirs, who perform regularly in London venues and have sung evensong in St Paul’s Cathedral, Southwark Cathedral and Westminster Abbey, as well as touring to Jersey, Paris, Poznan, Seville and most recently Cambridge. Old London Singers first sang at Cartmel Priory in 2017 and are delighted to be returning.
Tickets will be £10 on the door with a complimentary glass of wine at the interval. ... See MoreSee Less

CARTMEL PENINSULA LOCAL HISTORY SOCIETY is holding a tour of Cartmel Priory tomorrow at 2.30pm with admission of £5.
Further information on CPLHS, membership and activities can be found at www.Cartmel Peninsula Local History Society | Bringing Local History to the Community (wordpress.com) or from Stuart Harling on 015395 36296. ... See MoreSee Less

Catherine Shaw Are you still in The Lakes?

CARTMEL ART SOCIETY ANNUAL EXHIBITION
This year’s exhibition will be held on 12-14th August at Cartmel Village Hall between 10.00 and 16.00. Our friendly village Art Society has been going strong since 1966, please go to www.cartmelartsociety.co.uk for more details. ... See MoreSee Less

What a fantastic day! Well done to all involved 👏

A great day out

Wish I didn’t have to work today!!! Have a great show!

What a great show 😊

CHARITY CARTMEL IN BLOOM BBQ
Yesterday Philip and Sandra Pascall hosted the 6th annual Cartmel in Bloom BBQ in the beautiful surroundings of their garden.
More than 70 people braved the wind and rain. The quality organisation and homemade food turned it into a fabulous afternoon & evening.
A massive thanks to Team CIB who contributed so generously and to all those who attended.
The chosen charity this year is NW Air Ambulance. ... See MoreSee Less

Thankyou so much to everyone for your warm welcome the Cartmel in Bloom BBQ charity event, it was a lovely welcoming afternoon full of laughter and good cheer.

Great event, really had a lovely afternoon. thank you to everyone involved in the organisation.👏👏

We thoroughly enjoyed it very much and meeting new friends in the community. Fantastic food and bbq, thank you so much.

What a fantastic afternoon - great company and venue. Thanks to everyone who organised and hosted the event😀

Lovely day, thanks to all who organised, hosted and cooked for us! 👏👏

Thanks for a fabulous event, again 😊

Fabulous event. Party animals just love to 🥳 even in the rain 🌧 yay.

You re all fantastic!!!!

CARTMEL SHOW
WEDNESDAY 3RD AUGUST 2022
The 150th Anniversary will be celebrated with a host of new attractions.
The Cartmel Agricultural Show was formed in 1872 following a meeting at the Cavendish Arms, Cartmel.
This year the main ring will host the Shetland Pony Grand National terrier racing, parading heavy horses in their finery and the impressive Grand Parade of prize-winning animals in the afternoon.
Cumbria (and particularly the Cartmel Peninsula and surrounding area) is well known for its local gourmet delicacies, so where better to try them than at Cartmel Show? Take home freshly baked bread, hand-made cakes and chocolates, local cheeses, meats and pies from the local butcher, plus locally produced gins, beers and much more. If you love to cook, visit our Food Theatre to watch demonstrations from top local chefs!
Your little ones will love the range of activities on offer, from archery and a bucking bronco to circus skills, a bouncy castle, birds of prey and a few creepy crawlies too!
In amongst all of this, there are plenty of chances to browse amongst stalls selling handmade gifts, country clothing, homewares, outdoor and leisure goods. Admire the traditional skills of local craftspeople in the horticulture and village industries marquees and don’t forget to visit the poultry and rabbit marquee with its astounding range of pedigree animals!
What else is on at Cartmel Show?
A Dog Show - see dog breeds of all sizes and types be shown in the ring by their handlers
Cumberland and Westmorland Wrestling – watch the spectacle of this traditional local sport
Mounted fancy dress - a highlight of the show for many, local ponies and riders don their colourful and creative costumes to compete for first place in the mounted fancy dress class
Butchery demonstrations - watch talented local butchers display their knife skills in a meat cutting demonstration in the Food Theatre
Adults £12 and Children over 5 y.o. £5, advance ticket discounts on website
www.cartmelagriculturalsociety.org.uk/
Ample parking and free shuttle bus from Cark Railway Station. ... See MoreSee Less

And don't forget to pop into Cartmel Priory! It is spectacular.

Katie Ashwood looks like it's going to be a good show!!

Sounds delightful, wish I could be there. 😉 enjoy. X

The Marshal’s Theatre Company made a welcome return to The Priory this month with a selection of Shakespeare favourites presented as a delicious tasting menu of well known scenes, sonnets and sayings. And what a feast it was.
…and what a setting. Using the open performance space in the Priory nave, with an audience on all sides, versatility and flowing movement was possible. Good lighting and sound made it easy on ear and eye for everyone. The drama of the building was also apparent as the fading evening light was just enough to faintly illuminate the west and east windows. It is astonishing to think that when Shakespeare was writing and performing, our great Priory was already several hundred years old and the setting for the action was little changed.

There was neither a weak scene nor a weak performer. Individual voices, obvious ensemble teamwork and impeccable timing meant a great evening out.

We laughed at the antics of the many lovers, were horrified at the cruelty of the Macbeths and were on the edge of our seats during the trial scene in The Merchant of Venice. The self conscious incompetence of the ‘mechanicals’ in Midsummer Night’s Dream was hilariously done. The well known speeches such as ‘the seven ages of man’ and the epilogues to both The Tempest and Midsummer Night’s Dream had a convincing and moving freshness. But as I walked home at the end of a super evening, in my mind was the precise delivery of three sonnets and the absolute authenticity of the Romeo and Juliet balcony scene.

The Marshal’s Theatre Company, Cartmel Priory and the greatest writer in the history of drama; what a combination for our village.

Great review Sandra Williams! I am really sorry I couldn't make it 😔 xx

REMINDER
Banquet of the Bard, Cartmel Priory - 20th, 21st, 22nd and 23rd July.
The Marshal Players will be back in the Priory for the first time since the start of the pandemic with a brand new production adapted specially for the Priory. This production is a selection of five favourite scenes from a rich and entertaining Shakespearean menu and not one entire play. They'll perform in the round at the west end of the church - no restricted viewing for anyone. All tickets £12 (£7 for younger viewers!) will be available in person in advance or on the night from the Priory or via www.eventbrite.co.uk/e/a-banquet-of-the-bard-tickets-322555451037 ... See MoreSee Less

CARTMEL RACES are holding their next meetings on Saturday, July 16th and Monday, 18th with gates opening at 9.30am and the first races at 13.54 and 14.05.
Local traffic management will be implemented as per letter delivered to local households in April. Further information is available from the racecourse office on 015395 36340. ... See MoreSee Less

THE MARSHAL THEATRE COMPANY is performing “a Banquet of the Bard” with selected extracts from Shakespeare’s plays in the Priory nightly at 7.30pm from Wednesday, July 20th to Saturday 23rd. Tickets are £12 for adults and £7 for aged 12 and under can be purchased from the Priory shop or at www.cartmelpriory.org ... See MoreSee Less

Buy you tickets at cartmelpriory.org.uk/whats-on/1143/, or on the door. Running from 20-23 July in Cartmel Priory. Unique Shakespearean bite sized plays from all your favourites!

View Cartmel from the air 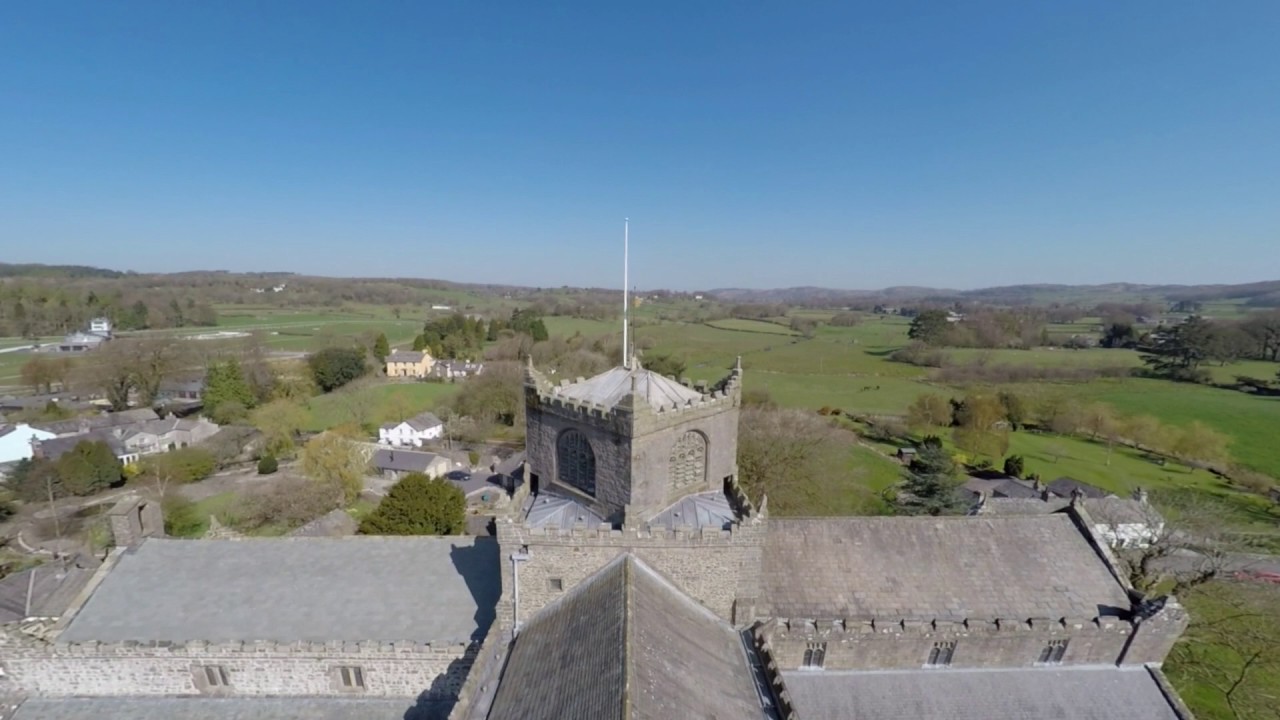