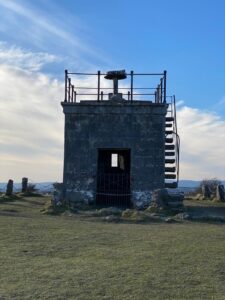 Hampsfell
One of my favourite things is coming out of our front door and walking up Hampsfell! Every time I stand in front of the hospice with its inscription in ancient Greek ΡΟΔΟΚΑΚΤΥΛΟΣ ΗΩΣ, which means ‘rose fingered dawn’, and if lucky to be there on a clear sunny morning – just as the first sun rays appear – it is pure magic!

Bus Shelter
Whether or not you take a bus trip, it is well worth having a look inside the bus shelter where you will find a selection of wall mounted mosaics, which have been produced by Cartmel Primary School children. They depict the children’s idea of Cartmel and its surrounds, and it’s well worth a visit.

The Priory
Many visitors to Cartmel go to the Priory for a quick look round the inside and probably miss out on seeing many of the interesting things therein. I’d recommend planning a visit on a Wednesday between April and October at either 11.00am or 2.00pm or between November and March at 11.00am for a guided tour lasting about an hour. At just £5, it’s excellent value for money. 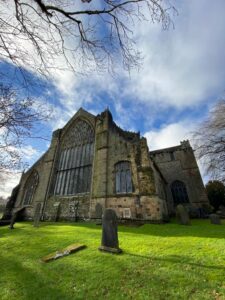 The Farmery Field
The Farmery field on the north side of the Priory is a site of an Ancient Scheduled Monument. It was once the site of a medieval infirmary for the extensive Priory and a burial place for many monks and villagers. It’s between the vicarage and a row of cottages but because there’s no sign, many people walk past and have no idea what is in the field.

The Old Village Lock-Up
Now a quirky holiday let known as ‘Cartmel Jail,’ the old village lock up was exactly that – a place of temporary detention for village rogues, drunks, and miscreants in the 18th and 19th centuries. They were built when rural communities struggled to police burglaries, drunkenness, and the stealing of livestock. Cartmel Lock-Up is just down from the entrance of the Village Shop and was awarded listed status in 1970. A plaque on the wall tells its tale.